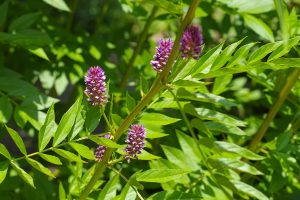 Glycyrrhiza Glabra is known worldwide as an efficient brain tonic & revitalizer, which also rejuvenates the brain. In times of stress it stimulates mental functions so as to maintain a calming and relaxing effect. It also increases the circulation within the central nervous system & may balance sugar levels in the blood

Glycyrrhizin is extracted from licorice root. It is used to sweeten and flavor many foods and pharmaceutical preparations (Yamamura et al., 1992).

Liquorice is one of the most commonly used herbs in Western and Eastern herbal medicine and has a very long history of use, both as a medicine and also as a flavouring to disguise the unpleasant flavour of other medications (Mitscher et al., 1978). It is a very sweet, moist, soothing herb that detoxifies and protects the liver and is also powerfully anti inflammatory, being used in conditions as varied as arthritis and mouth ulcers (Arase et al., 1997; Fujioka et al., 2003).