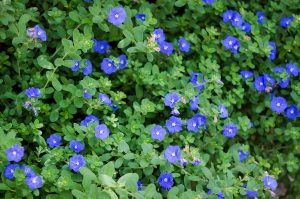 Evolvulus alsinoides (EA) is well known for its memory enhancement, antiepileptic, immunomodulatory , adaptogenic and anti-amnesic properties in the traditional system of Ayurvedic medicine. It is a remarkable herb known for its antidepressant effect as well as its intellect promoting capacity.

Primarily it is a nootropic or brain tonic, alleviating psycho-somatic symptoms, promoting discrimination as well as being a rejuvenator of the mind and brain.

The plant is reported to be a prominent memory improving herb It is claimed to make students more receptive to learning and reduces stress of examinations and overwork thus keeping students sharp and alert. It is quoted by Charaka , a renowned Ayurvedic researcher, to be the single largest herb for enhancing mind power . It also reduces anxiety, counteracts mental fatigue and corrects nervous debility.

It also has anti-hypertension effects and can be used highly effectively as an adjunct in the treatment of high blood pressure.

There is a pertinent reference in the literature about the use of the drug as brain tonic in hypotensive syndromes. The pharmacological studies of the herb have shown varying degree of its hypotensive and tranquilizing effects. Clinical studies have exhibited demonstrable beneficial effects in the patients of anxiety neurosis. The herb induces a feeling of calm and peace, good sleep and a relief in anxiety, stresses, mental fatigue, producing a significant reduction in the level of anxiety, neuroticism arising due to various levels of stresses. The herb appears to produce its action by modulation of neuro-chemistry of the brain. Further, the herb is non-toxic and its use does not produce any side effects