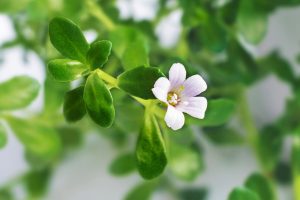 Bacopa monnierra (BM) is renowned for its memory enhancing effects. This herb also increases intelligence, promotes mental endurance and improves the processing capacity of the brain. Recent research has identified that certain constituents of this herb increase a substance known as nitric oxide in the brain. This substance is known medically to improve circulation to the brain and well as promoting repair of damaged areas in the brain ( especially in the 1st or 2nd day of brain trauma). Bacopa is regarded as a brain rejuvenative herb. Even children with cerebral palsy have shown improved mental function over months of use.

Bacopa’s ability to positively impact upon cognitive ability appears to be due to the enhancement of nerve impulse transmission as a result of the actions of triterpinoid saponins and their bacosides, more specifically bacosides A and B. Damaged neurons are repaired by these bacosides due to their ability to enhance kinase activity, neuronal synthesis and restore synaptic activity.

Bacopa extracts have been shown to modulate the expression of certain enzymes involved in generation and reactive oxygen species in the brain.

Bacopa has a relaxant effect upon pulmonary arteries, the aorta, trachea and ileal and bronchial tissue as a result of the inhibition of calcium-ion flux into cell membranes. Its ability to inhibit prostaglandin synthesis and to stabilize lysosomal membrane give it an anti-inflammatory ability. Bacopa also increases serotonin levels. Serotonin is a neurotransmitter that promotes relaxation.

Bacopa’s antioxidants also appear to have a protective effect upon human DNA connective tissue cells (fibroblasts), suggesting that it may have benefits in treating diseases where free radicals are an issue.

Bacopa inhibits the enzyme cholinesterase. Cholineterase breaks down acetylcholine, which is a neurotransmitter which fails in Alzheimer’s patients

Benefits of the Bacopa Monniera contained in Memorx

1> Effect as a Memory Enhancer – Recent research has confirmed what practitioners of Ayurveda have known for over a thousand years – that Bacopa Monniera significantly enhances memory.
2> Effect on Central Nervous System – Researchers believe that Bacopa Monniera has the ability to stimulate gamma-aminobutyric acid (GABA), an amino acid that occurs in the central nervous system and that is associated with transmission of inhibitory nerve impulses. . This enhanced ability to synthesize GABA leads to improved acquisition, memory and adaptation to new conditions.
3> Effect on Epilepsy and Anxiety – Bacopa has been used for centuries as a remedy for epilepsy. Western studies have shown that it does, indeed, have an anticonvulsant effect when administered at high doses. The supplementation with bacopa extract has also led to significant decreases in anxiety symptoms, levels of anxiety, levels of disability and mental fatigue. Significantly, these benefits occurred in the absence of the amnesiac side effects associated with many popular anxiety related drugs (such as Lorazepam). On the contrary, memory enhancement was achieved.
4> Effect on Alzheimer’s – By inhibiting the breakdown of the enzyme cholinesterase, a key nuerotransmitter which fails in cases of Alzheimer’s and dementia, Bacopa has the potential to positively affect sufferers of these conditions
5> Effect on Cancer – In vitro research points to some exciting benefits for cancer patients. It has been demonstrated that Bacopa saponin fractions have cytotoxic activity for sarcoma-180 cells. Reseachers believe this is due to bacopa’s ability to inhibit DNA replication in the cancerous cell line.